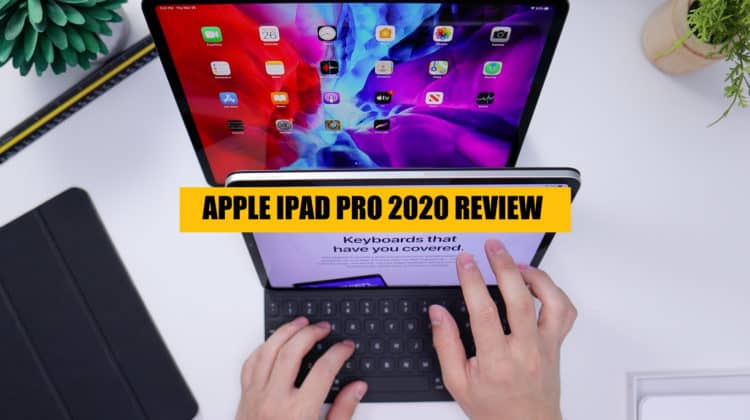 The most potent Apple’s tablet, iPad Pro 2020, is in the market with blazing speed, new and updated features, an optional keyboard case, utterly new camera systems, and a long-life battery with a high capacity. The new iPad Pro is not yet a laptop replacement, but here is the full iPad Pro 2020 review.

The Apple iPad Pro 2020 wants to be a quasi-computer. Until now, the iPad Pro is said to be a tablet on steroids, beating most laptops on battery life and speed but not on computing comfort. iPad Pro, for the first time, supports fully the new magic keyboard that adds a trackpad and the cursor input.

The iPad Pro 2020 also raises the ante in terms of performance with a new A12Z chip (Bionic) with an 8-core graphics engine and a new dual-camera system that has an ultra-wide lens that offers a more responsive reality experience.

The iPad Pro 2020 is merely identical to its predecessor, which is a good thing.

The 12.9-inch slab covers almost the whole screen having narrow bezels on all the four sides, an ultra-slim profile, and rounded corners. The most visual difference is around the back, where there is a square camera bump located at the upper left corner that contains the LIDAR scanner and the dual cameras. Artistically, iPad Pro is very much like the iPhone 11 Pro.

When it’s viewed from the front side in a landscape mode, there is a magnetic stripe on the top edge where the Apple pencil is attached. The USB-C port for plugging in accessories and charging is the only port on the right side. iPad Pro houses a TrueDepth camera upfront like the 2018 model, which enables the face ID to ease unlocking the device. 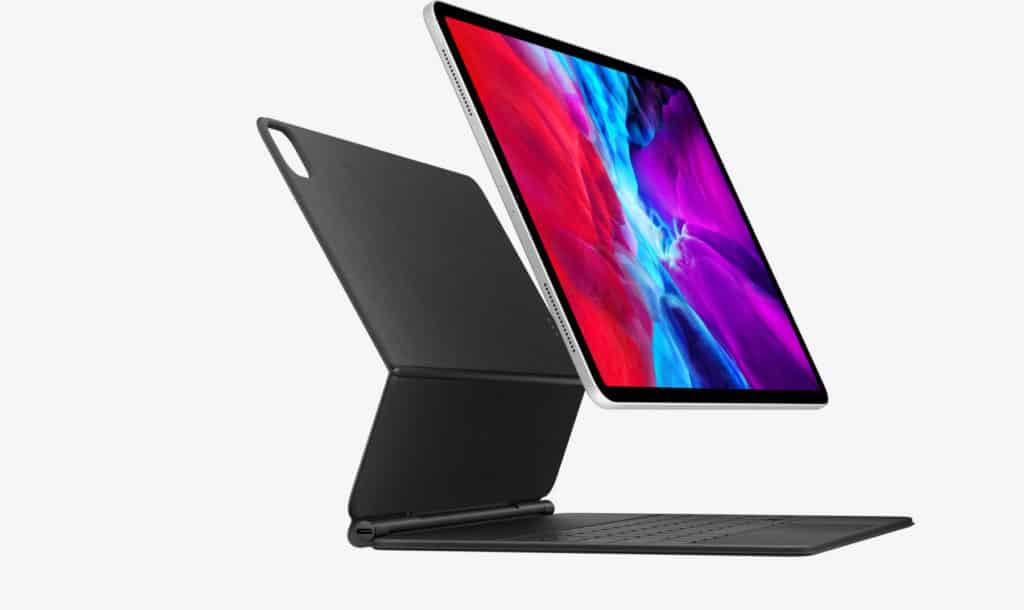 iPad Pro 2020 has a liquid Retina display, which is one of the best screens on any mobile device. It’s colorful, brighter, and leverages the ProMotion technology by adjusting the refresh rate automatically to up to 120Hz.

The screen goes ahead to give a sublime experience with Apple that includes the P3 broad support for the true-to-life colors, the right tone is to adapt the warmth of the screen automatically to match the environment and the anti-reflective coating that helps you to have a clear view of what is on the screen regardless of the conditions.

The screen of the iPad Pro 2020 also provides a wide range of colors, having 122.9% of the RGB color gamut. The Surface Pro X and the Surface Pro 7 hit 103% and 102%, respectively. Very high color-accurate is expected as well, as the iPad became a Delta-E score of 0.34. for this test, a score of zero is perfect.

The iPads’ long overdue feature is finally there with iPadOS 13.4, and that is the trackpad support. iPadOS now has a redesigned cursor that looks like a circle on the screen, and it’s no longer relegated as being an accessibility feature. And this circle changes into different shapes depending on what you are doing.

On the Home screen, for example, the cursor disappeared as I flickered over various application icons, and the icons increased in size. And the pictures app the circle highlighted the heart and the share icons as I hovered over them in a small box. When you are on the web page, email, or document, the cursor becomes the I-beam for right-clicking works, selecting text for copying text. Google Docs does not yet support selecting text.

As Apple’s Magic keyboard is not yet available, which includes a trackpad, I instead tested it with Apple’s oversized magic Trackpad. This accessory provided a taste of what to expect, though third-party Bluetooth mice can also be used.

iPadOS’ Split View and Slide Over gestures are even more accessible to activate when using a Trackpad or a mouse. Open an application and drag it to the right or left side of the screen from the dock to split the display between two applications.

Apple assures that on a single charge, you will be able to get around 10 hours of playtime, and this seems to be accurate. Several tests of our iPad Pro review unit have been run, and it seems the tablet will take even a very long flight.

Watching an hour on YouTube, for example, with the brightness level set to high, uses around 10% of the battery life. And when the battery runs dry, there is always a USB-C charger which will recharge it to full in not more than 2-hours.

It’s essential to keep in mind that MacBook Pro and Air owners also can use their chargers with the iPad Pro, which will recharge the device at a higher speed. Although iPhones and Airpods still use the old lighting cable, so you will always be required to carry a few chargers along when you travel.

Apple discarded the Touch ID fingerprint scanner that was on the iPad Pro 2018 and switched to using its more advanced Face ID to unlock the screen. The nifty technology is now found on the 2020 model, which is, at the same time, terrible and good news. If it works, the Face ID is impressive as it unlocks with the display in the blink of an eye. Unfortunately, the position of the True Depth camera located at the top of the tablet means that when in landscape mode, you will mostly find yourself covering the sensor with your hands inadvertently.

Some other bonus on the iPad Pro is the four ear-shattering speakers, which to be believed must be heard. If any case you happen to buy a 2nd generation Apple pencil, you will be able to stick it to the tablet (at the top), getting a battery boost instantly using this digital stylus once attached. 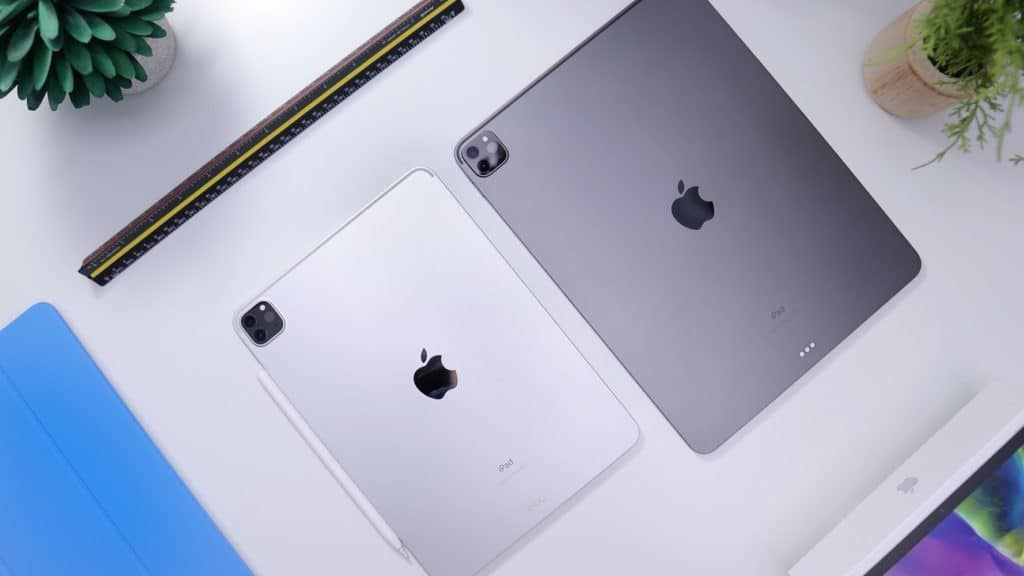 Apple is increasing more cameras at the back of its flagship iPhone model for some time, and now the iPad is embracing the change too. At the back case of the new iPad model, you will be able to see a dual-lens camera that provides ultra-wide shots and wide-angle to the tablet.

The new ultra-wide camera (10-megapixel) makes the iPad Pro indeed more versatile, and it’s better than Apple has now come up with more image options for the owners. During the test, videos and photos from these cameras are outstanding, with images looking colorful, sharp, and packed with details. However, its photography capability is still something that slightly perplexes us.

Some although, will enjoy the cheap bumper viewfinder which goes by the laptop screen size, taking photos with a 12.9-inch slate in your hand is slightly way tricky, and we are more likely to get our iPhone when we want to take a family photo.

We are not knocking Apple for raising the photo quality of its iPad Pro. It’s great to see this new iPad catching up with the latest iPhone models. The problem is we don’t have an assurance that people will make use of the dual lenses.

What is essential in our eyes is that iPad Pro continues to use the portrait mode when snapping selfies, meaning you can add some style such as blur to photos of your face. You can also be able to animate MeMoji or AniMoji characters when making Face Time calls to relatives or shooting selfies. 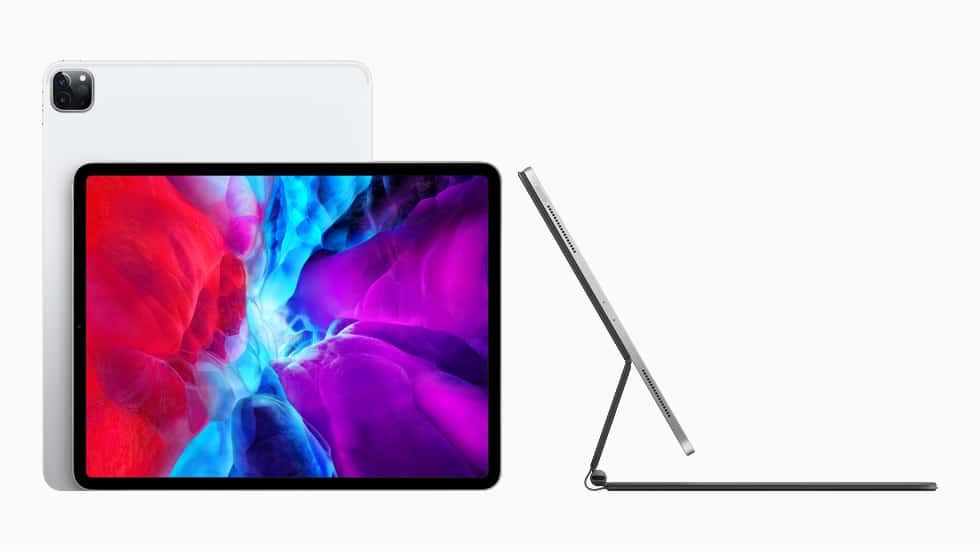 The Magic Keyboard (coming in May) for the iPad Pro 2020 seems to be a significant upgrade over the Smart Keyboard Folio accessory (which costs around $199). Still, it is also highly rated on the cost of 349 Dollars (for the iPad Pro 11-inch is 299 Dollars).

For beginners, that is not a terrible keyboard. The Magic Keyboard uses a similar scissor-style mechanism as in the 16-inch MacBook Pro and new MacBook Air instead of the fabric-like feel. And with that, you get a new solid 1mm of travel having a backlit layout.

Just as important, Apple has a Trackpad around the Magic Keyboard for supporting various gestures that are now available on the iPadOS and for precise cursor control. Some other highlights, such as a floating design that allows you to adjust the iPads Pro angle from 90 degrees to 130 degrees as compared to the two positions provided by the Smart Keyboard Folio. The Magic Keyboard comes with its USB-C port for charging, which in turn frees the iPad Pro’s USB-C port for plugging in other accessories.

We are looking into testing the Magic Keyboard once it’s available, but at the moment, it seems like a compulsory accessory to have for the ones looking to ditch their laptops.

The new iPad Pro 2020 includes the A12z Bionic processor, which offers an 8-core CPU and also a new 8-core GPU, which is designed to provide a massive boost in graphics performance.

On a Geekbench 5, used to measure the overall performance, 12.9-inch iPad Pro scored 1,126 on the single-core test and 4720 on the multi-core portion. That is a significant improvement compared to the last iPad Pro (with A12X Bionic chip), which scored 1114 and 4635, respectively.

In comparison, the Surface 7 Pro turned in 4443 a lower score on the multi-score test on the Geekbench 5, and scored a higher of 1241 on the single-core, and that is with a tenth generation Intel Core i5 processor and a RAM of 8GB. On the other hand, the Surface Pro X could not run on Geekbench 5, whereas it thas an ARM-powered Microsoft chip SQ1.

Expect a fast-real-world performance also. It took only 34 seconds for the iPad Pro to export a 4K video to 1080pixel after transition and applying color in the Adobe Rush App. On the other hand, it took 46 seconds for the iPhone 11 Pro to accomplish the same task.

The iPad Pro delivers more graphic muscle through the A12Z Bionic. The new iPad Pro scored 21009 on the BaseMark GPU test compared to the previous version, which scored 19588. Currently, we are the process of testing other benchmarks, for which some are not optimized for iPadOS 13.4, please stay tuned for some updates on this review.

The one thing that is hard to go unnoticed is the iPad Pro’s price. If, for example, you opt for the 12.9-inch model, the 12.9-inch model $1201, whereas the 11-inch model starts from $955. That quite expensive in comparison, which is due to the new specifications available. And if all the extras are to be summed up on the 12.9-inch iPad Pro, which includes the Forthcoming Magic Keyboard and the 2nd generation Apple Pencil, it will sum up a price over $2479.

The critical thing to note is that Apple has increased the storage capacity, which means now the entry-level Pro starts with 128GB rather than the 64GB on the previous generation.

iPad Pro 2020 represents an excellent step for the iPad. Through offering a real Keyboard with touchpad, it is a closer competitor now than it has been ever before with the Surface Pro X and the Surface Pro 7. The iPad Pro gives you longer battery life and a snappier performance for your money. You also get the ability to run a new class of the Augmented Reality (AR) and better cameras with the iPad Pro 2020, which are the two areas where both Surface Pro X and Pro 7 are far behind.

However, the developers have not optimized their applications for the new cursor control powers in Apple and iPadOS, and they should push the platform further to make the iPad keyboard-friendly and more touchpad.

Let us know what you think about the new Apple iPad Pro 2020 in the comments below.