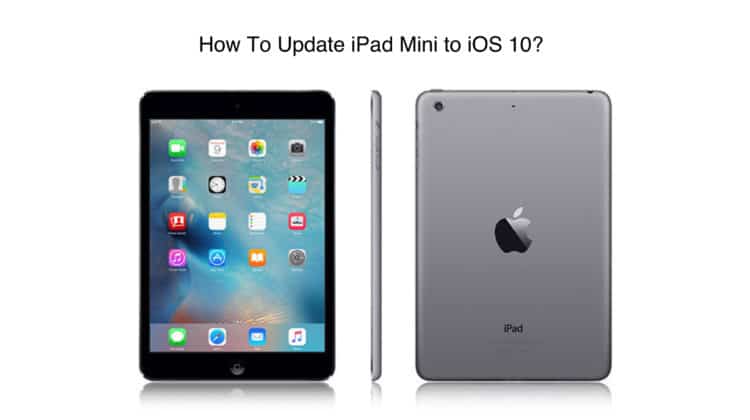 Apple releases new software updates for its iPads to improve security, introduce new features, and fix bugs. Although older iPads don’t get significant version updates, they get security updates. Still, many iPad Mini users want to upgrade their device to the latest possible iOS version. The guide will show you how to update iPad mini to iOS 10.

How to Update iPad Mini to iOS 10

Wondering how to update iPad Mini to iOS 10? Upgrading to iOS 10 is an easy process. On your iPad Mini, just go to the Settings > General > Software Update to check if the iOS 10 is available on your tablet. If it shows the update as available, tap the Download and Install option to begin the download of the update. Your iPad Mini will restart after the installation.

We list the instructions in an easy-to-follow process to understand how to update iPad Mini to iOS 10. Before you go ahead with installing iOS 10 on your iPad Mini, confirm that you are connected to a stable Wi-Fi connection and have enough battery left on your tablet. Ideally, the battery should be above 50%.

You can try all the ways to search for iOS 10 for your iPad Mini, but you must be prepared to face disappointment. That’s because your iPad Mini is not compatible with iOS 10. Apple’s iPad Mini 1 has an underwhelming processor that can’t handle the advanced functionalities of iOS 10.

Several articles on the web might tell you otherwise and encourage you to try force installing iOS 10 on your iPad Mini, but we implore you not to fall for any tips and tricks. You will only damage your properly functioning iPad Mini.

The first-generation iPad mini has restrictive limits due to its processor, so it can not be updated to iOS 10.  However,  the A7 processor in the 2nd-generation mini allows you to upgrade from iOS 7 to iOS 12. The  3rd gen model of iPad mini is identical to the 2nd gen, except it runs iOS 8. The iPad mini 4th gen can run iOS 9 through 15, thanks to the A8 processor on it.

The A12 processor of the iPad mini 5 supports iOS 12 and 15. With a significantly improved A15 chip in the current 6th gen iPad mini, this tablet is suited for iOS 15. You may begin the update process once you’ve verified that your tablet is compatible with iOS 10. The procedure is relatively simple.

Below we give you related information about installing updates on old iPads. Rest assured, at WorldOfTablet, we never suggest malicious methods to get the desired update on your iPad.

Getting iOS 10 on your old iPad depends on your iPad generation and if it has the support for iOS 10. You can check for the update and install it on your old iPad wirelessly or via iTunes using your PC/laptop.

Update to iOS 10 on an old iPad using WiFi

One of the easiest ways to search for an update on an old iPad and then install it in the smoothest possible way is via over-the-air (OTA) update method. However, before diving into this method, we suggest you take a backup of your iPad and fully charge it. Also, connect it to a fast and stable WiFi connection to install the iOS 10 update.

Once you are ready, follow the steps below to install iOS 10 on the old iPad.

How to install iOS 10 on old iPad via WiFi

If your old iPad does not show any update, it is because it has no significant update available and is incompatible with iOS 10 due to hardware shortcomings. You can also try checking for the update using iTunes on your PC or laptop. We list the instructions below.

Update to iOS 10 on an old iPad using iTunes

Another way to check for iOS 10 update for your old iPad is by connecting it to your PC or laptop and opening iTunes. You need to connect your old iPad to your system using the iPad’s charging cable. Once it is connected, open iTunes and click your iPad in the left panel. Follow the steps below to carry out the entire process.

How to install iOS 10 on old iPad via iTunes

Here’s a list of old iPads that have dated hardware and cannot possibly support iOS updates after iOS 9.3 and iOS 5 (for iPad gen 1).

Here’s a list of old iPads that still support iOS 10 and above software versions.

How to Force iPad to Update to iOS 10

Usually, this force update method is used by iPad users when their iPad gets stuck on the Apple logo or when it has a black screen of death issue. But it can also be used for updating iPad Mini to iOS 10. Follow the steps below to force install iOS 10 on your iPad.

How to force install iOS 10 on iPad

What Should I Do With My Old iPad Mini?

So you have an iPad Mini and are wondering what to do with it since it stopped updating beyond iOS 9.3, and there’s no possible method to updatethe  iPad Mini to iOS 10. We have some stellar recommendations for you to use your iPad mini creatively. Of course, the other way would be to re-sell the iPad Mini, but you won’t get close to what you spent on it. So, it’s better to re-utilize the tablet differently at home rather than sell it for pennies on the dollar.

The display on your iPad is a significant part of the device. Because of the high picture quality and compact design, it is ideal for use in any room in your house. Why not turn it into a specialized smart home hub?

Apple’s Home app can connect to many smart home devices via iCloud. Think of everything from speakers to doorbells to home security systems; you can control them with your old iPad mini. And much like lord of the rings, here, you will have a single app to rule them all, i.e., the Apple Home app.

Set up your smart home gadgets on your old iPad. Mount it on a wall so you can show all your home gadgets in one place. You can make adjustments on the go, and everyone in the house can access it easily.

Extra screen real estate is a priceless commodity. In the age of work-from-home, having a secondary display can enhance your productivity. So why not reuse your old iPad mini as a secondary display on your work desk. If you have a MacBook or an iMac, you can easily connect the iPad mini using the Sidecar app and seamlessly use it as a second display.

There are several techniques to use your iPad mini as a remote control. To control your Apple TV or iTunes, you may use the pre-installed application on both the iPhone and iPad. Alternatively, you might also want to try third-party remote apps in the App Store to control your TV and other supported devices.

This is a simple one. Displaying video snippets and images as slideshows is possible on the iPad. In addition, it’s lightweight and thin. There’s no reason not to use it as a digital picture frame. Simply put it up or place it on a wall, and you’re ready to go. iPad stands or sticky mounts like Velcro work well for this purpose.

To complete the process, you’ll need a means of supplying power to the device. You can connect your iPad over longer distances using a USB extension cord. You may use a low-cost and Apple-certified USB wall charger for this.

In the Kitchen as Recipe Reader

An iPad is an excellent cooking companion for finding and following recipes and watching how-to videos when you are cooking. For those honing their culinary skills, having an iPad placed near your cooking station is the best way to follow a recipe without distractions.

That’s all the uses we could think of for your old iPad Mini. In the present-day scenario, where we have gotten more used to working from home setups, repurposing an old iPad Mini is the best way to go.

Check the video below for more fun uses of an old iPad:

Now that you have all the answers on how to update iPad Mini to iOS 10 or repurpose an old iPad Mini, we must get to other related questions on the topic.

No, the iPad 2 cannot be updated to iOS 10. The iPad 2, iPad 3, iPad 1st generation, and iPad Mini are incompatible with the iOS 10 update. They all share identical hardware designs and a less powerful 1.0 GHz CPU that’s not powerful enough to handle the features of iOS 10.

Is It Possible To Update An Old Ipad To iOS 10?

If you have an old iPad released after 2013, there’s a chance it will be compatible with iOS 10. If your iPad was released before 2013, you will most likely not get iOS 10 support for it.

We hope this guide helps you understand how to update iPad Mini to iOS 10. We have tried our best to explain the topic and the compatibility of old iPads with iOS 10. If your iPad mini does not upgrade to iOS 10, you always have an option to re-purpose it for other uses at home.

I’m a tech enthusiast who has a knack for tablets. I wait for the day when an Android OEM will finally be able to topple an iPad, and no my bet is not on Samsung. Besides doling out my opinion on tablets, I also like to write troubleshooting guides for them.