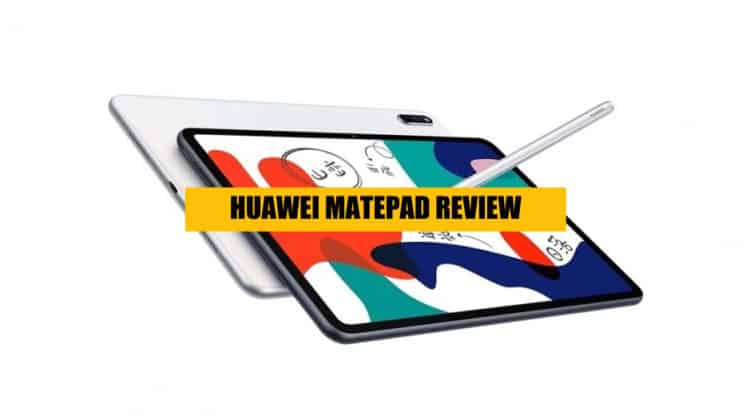 Even with the recent US trade ban, Huawei still manages to come up with amazing inventions. Huawei phones and tablets have been around for quite some time, serving every corner of the world. So good are these phones that most people view Huawei as a cheaper and a better alternative to the iPhone.

One of the recent gadgets to be launched by Huawei is Huawei Matepad 10.4. Just like the other inventions, this fantastic product is loaded with several features that prove useful. It was launched on April 23, 2020. In this Huawei Matepad review, therefore, we will take a more comprehensive look at the device. We will look at its features, specifications, amazing details, and everything that you need to know. We will also give you a verdict of whether or not you should go for it.

The tablet has an IPS LCD capacitive 10.4-inch touchscreen display completely loaded with a TUV Rheinland eye-health certification. The display allows for a high accuracy stylus-the OEM’s Mate Pencil. The screen resolution stands at 1200*2000 pixels, with a 5:3 ratio.

This fantastic gadget has a primary and selfie camera. The selfie camera, which is centrally located on the edges, is an autofocus HDR camera with an 8MP resolution. The camera has a LED flash and records video at [email protected] The primary camera is a single 8MP autofocus HDR camera that also captures videos at [email protected] It has a LED flash with panoramic abilities.

The Huawei Matepad tablet has four stereo-enabled loudspeakers, which are tuned by Harman Kardon. It, however, lacks a 3.5mm jack.

The Huawei Matepad 10.4 has a non-removable Li-Po 7250 mAh battery with an 18W fast charging ability. It has a type-C charging port.

This tablet is android enabled, running on the latest Android 10 model.. It has a Kirin 810(7 nm) chipset and an Octa-core CPU. It has a Mali-G52 MP6 GPU.

This new tablet from Huawei comes in two models. The BAH3-WO9 model supports runs on Wi-Fi only, whereas the BAH3-ALOO is LTE enabled. It also uses GSM and HSPA technology.

This tablet is Bluetooth enabled. It supports Bluetooth version 5.1. It has no radio and is WLAN-enabled. It has a Wi-Fi and hotspot function. For those asking about GPS, this product is GPS enabled. The Wi-Fi-only model has A-GPS, whereas the LTE model has BDS. It has a USB 2.0 port with a type-C 1.0 reversible connector.

The Huawei Matepad 10.4 comes in two RAM option. The first model supports a Ram of 4GB, with a memory of 64GB, whereas the second one has a 6GB RAM with an internal memory of 128 GB. The tablet also allows external memory of up to 512 GB thanks to its microSDXC memory card slot.

The Huawei Matepad 10.4 has a large battery capacity, which guarantees an extended duration of usage. The battery capacity stands at 7250mAh, which is twice the battery capacity of most phones. The tablet also has an 18w type-C charger that supports fast charging saving you time. The 18W charger is also rare in tablets. It can last up to 12-hours. You can charge it from 0-100% in under 90minutes.

The main reason behind the production of this Matepad by Huawei was to simplify and make reading easier. It, therefore, has a special reading mode with a monochrome e-paper experience. The tablet also monitors your viewing distance and posture. Furthermore, the tablet has several learning resources and a user-friendly interface that makes reading more accessible and enjoyable. The four Harman Kardon-tuned speakers and several multimedia features simplify virtual learning.

The Huawei Matepad 10.4 has a TUV Rhineland certification, which makes its display suitable for the eyes. It, therefore, cuts blue light content and flickering, while providing a better image quality, which also makes it ideal for reading.

In case you fancy other types of input, the Huawei MATEPAD 10.4 has a fantastic pen input thanks to its SM pencil stylus. The stylus helps, especially if you are hands are tired, or you want to keep some distance with the tablet. The stylus also comes in handy when reading, to underline key points, add information, or make corrections quickly.

What happens when you want to run two wind0ows at a time without closing one? Activate the multi-window function. The Huawei Matepad 10.4, through its UI-made software, offers multi-window support as well as integration with other compatible devices. While this might be common in many tablets, Huawei Matepad 10.4 has a parallel horizon function, which is a better improvement to the screen split function.

The Huawei Matepad 10.4 has a sleek and beautiful design. It comes in two amazing colors, White and gray. It also has a glass touchscreen, which gives it the clarity and glow you need in your tablet. The tablet also has antenna lines moving towards the display The selfie camera is centrally placed, which adds to this fantastic tablet’s aesthetics and offers you a better visual experience, ensuring that you do not encounter black spots on your screen

. It also comes with a beautiful cover to prevent scratches, improving the overall design. The bold Huawei print at the back also gives this Matepad the characteristic giant look.

The Huawei Matepad 10.4 has four Harman Kardon-tuned speakers to boost its overall multimedia experience. The speakers offer you a pleasant time listening to music or watching movies from this fantastic tablet. Coupled up with its amazing display, this tablet towers above other options.

The Huawei Matepad 10.4 tablet has ample storage in all its models. The first model comes with a 64 GB storage space and the second one a storage capacity of 128 GB. This device also allows for expandable memory of up to 512 GBS.

The Huawei Matepad 10.4 has a metal frame with aluminum back, which makes it durable and less vulnerable to breakage during falling. Other parts of the tablet are also made from premium materials.

It does not support google services

Owing to the recent trade bans by the US, The Huawei Matepad 10.4 does not support google services. (Google Chrome, YouTube, Gmail, etc.) This is a setback, especially for people who are accustomed to google services. You cannot, therefore, access Google’s apps and services since they are considered unsupported. These apps are not also available either for preload or sideload functions. The tablet, therefore, lacks essential apps such as Maps and YouTube, which is a significant setback in most of the latest Huawei models. This is after the US government banned sales to Huawei.

This amazing Matepad from Huawei only comes in tow colors, whiter, and gray. The truth is, a lot of people prefer black gadgets. Huawei had also started incorporating other colors in its devices, such as Sapphire Blue. Limiting users to only white and gray is there an unfortunate idea.

Unlike other tablet brands at the same price range, the tablet does not come with an M-pen. You will, therefore, spend more if you need a stylus.

One would expect that this tablet has fingerprint technology owing to its launching date. Huawei Matepad only comes with face recognition software. Fingerprint sensors are easily accessible, unlike face recognition, which is affected by conditions such as poor lighting.

The device lacks a 3.5 mm audio jack. This is a setback for those who enjoy listening to music via earphones or auxiliary cables.

The Huawei Mtaepad 10.4 was mainly unveiled to help support learning. It has a big screen and the Huawei M-style stylus, which is used for input. Remember, for students a pen is more important than a keyboard. You improve on your thinking process as you write down points. You get a chance to edit, save, and share content anytime.

The split-screen function also makes the Matepad a good learning source. You can easily access the web class application and the notes application with the split-screen function. You can also take notes as you listen to the instructor, which makes multitasking easy. The parallel function in the Huawei Matepad 10.4 also comes in handy. One can easily attend online lessons while referencing materials at the same time.

The large screen also provides multi-screen synergy. To prevent phone calls and messages from interfering with your learning, you can quickly move your phone directly to the screen tablet, thanks to the multi-screen collaboration, and connect calls directly on your tablet. This is one of the best ways of attending to your calls and messages without losing sight of your screen.

It is crucial to protect the eyes while reading. The Huawei Matepad, therefore, has an e-book mode feature that makes the screen of your tablet to simulate the screen e-book, which reduces the screen brightness. The tablet also has a distant eye protection feature that detects when you are too close to the tablet or whenever you assume a lying position to view the tablet. The distance eye protection feature, therefore, reminds you to sit up.

The tablet is pressure-sensitive, which is a plus to art students. It allows you to create hard or light strokes depending on the amount of pressure you apply to the screen, a feature that is beneficial for students pursuing art and design courses. Thanks to its sleek design, this fantastic tablet can easily fit your hand as you study. The Kirin 810 processor can handle all the learning software, and the Education Center Huawei has established.

The Matepad also allows you to store a vast amount of educational materials, thanks to its 64 GB memory on its first model and 128 GB memory in the second one. The tablet also has an SD card port in case you are running out of memory. You can, therefore, expand your memory up to 512 GB.

The Huawei Matepad is a mid-priced tablet with a range of features. It would be a great tablet for students and workforce people, to assist with school and daily tasks, but there is a major flaw to this tablet – Google Ban.

Some of the setbacks include google services restriction, which bans you from certain apps such as G-mail and YouTube, etc.. You cannot also access web browsers such as Chrome. The Huawei Matepad tablet has not retailed for long since it was unveiled in late April. There might come some updates that will change this.

Should you buy this tablet? Well, judging from its features and functionality, the Huawei Matepad tablet is worth its price, but there are some serious downsides. If these downsides aren’t bothering you, from a technical perspective it’s a good tablet, but in our opinion, most people are using Google products, for work and entertainment, so why wouldn’t you just get another tablet? Apple’s device or Samsungs device, there are no restrictions, it’s a safer pick.

Our conclusion: It’s a good tablet from a technical perspective, but considering the Google ban, we wouldn’t recommend this device.

There are issues with the availability in the USA

We hope this article was helpful and it gave you some insight into what this device is capable of. Let us know what you think of this Huawei’s tablet in the comments below.

Have a good one guys, cheers.