Finally, the wait is over, the lightest, thinnest, and most awaited Lenovo Chromebook duet is here, and it is hitting the markets like none of the chrome os tablets before. The new device is already launched and released to most countries. The device is designed distinctly for mobile productivity. It comes with outgoing features like an ultra-thin detachable laptop-grade keyboard, with a 10.1-inch display screen that is versatile and enables its users to complete their work from the home office, kitchen, and bedroom or at the coach.

We believe tech companies that are creating Chromebooks have learned that you don’t sell these devices without a keyboard. The keyboard is included in the device. It’s starting at $279. 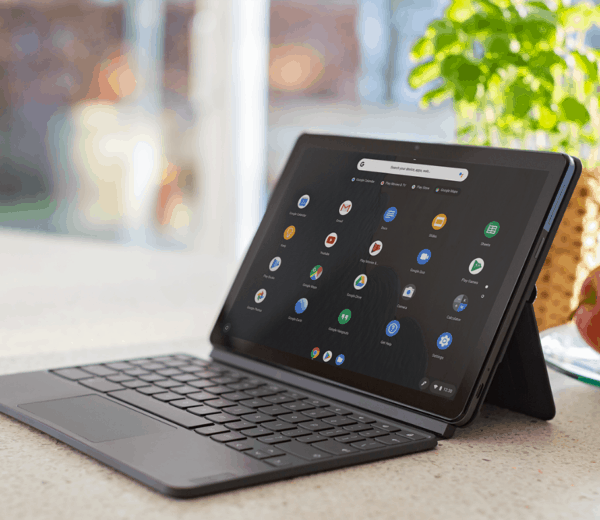 Let’s have a look at the new Lenovo Chromebook duet overview. It’s pros, cons, specifications, details, and more. Let’s take it apart and figure out exactly how good is it, is it better than other tablets? Where should we categorize it? Is it good for drawing? taking notes? watching movies? entertainment? Internet surfing? Let’s analyze where does it exactly fit in in this world of tablet.

Minus the keyboard Chromebook duet tablet measurements are 9.44×6.29×0.29 inches, and its weight stands below one pound only.

Chrome duet display is exquisite and extensive at 10.1-inch 1920×1200 screen, encircled by bezels, which approximately measures three eights on all its sides.

From the top, there is a 2MP front-facing camera used for Google hangout chats, skype, zoom, etc., a camera status indicator, and an ambient light sensor.

When you turn over the chrome duet, Lenovo has opted for a striking two-tone color scheme with two-thirds of the bottom is covered in iron grey, and the top is ice blue, which contains a shiny logo of Lenovo to the left. From the corner to the right, there is a quite large lens of approximately eight inches for the 8MP rear-facing camera.

On the top edge of the tablet, there are two speakers, on the right side, there is a power button, volume control, USB Type-C port, and a battery indicator.

Lenovo Chromebook screen can display seventy percent of the color gamut, and its screen reaches to 400nits of brightness. The screen is fascinating and attractive, especially when displaying text or graphics. Videos from YouTube are satisfactory appealing without the inkiest of blacks. Generally, for daily usage in rudimental scenes, the screen will serve and satisfy the user.

The panel is a touch screen, and the Chromebook duet gets loaded with an optional SI stylus, which is essential and makes note-taking and drawing easier.

Chromebook duet has a moderate volume, even though it’s not loud, it’s not recommendable to operate it in full volume. Because according to its users, when listening to soprano vocals, there is noticeable distortion. Besides even to weak bass vocals, there is an evident distortion, it’s not terrible, but it’s not something you would often want to hear.

Lenovo will get you thrilled when you find out that the Chromebook duet comes with a stand and keyboard. Both come with a captivating dark grey color.

However, the keys get sculpted in a unique Lenovo way; thus, they are small side and squeezed together with a space of less than an eighth-inch between them. For individuals with big or medium hands, it doesn’t sound like a good idea, it might be difficult to type, besides most of its secondary keys like the punctuation marks and tab shrink further, hence at first, you will trip. (But that’s something you can expect from a 10-inch tablet)

Ideally, Lenovo may have more users if it were not for the squeezed keys, which may make some users feel cumbersome when using. Generally, the keys respond quickly apart from the spacebar, which is a bit awkward and stiff, which may not be a taste of many users. But fortunately, on the brighter side, one can use the touchscreen to type.

The stand fabric cover has a kickstand attached to it, which provides adjustability, however, it’s on the thin side. therefore, setting it the way you need it is a bit tricky for the first-timers.

Like windows, chrome OS provides a tablet mode, which increases extra functionality, simplifying the touch and sensitivity experience. It defaults to search mode, and therefore with ease, one can scroll and click apps to open them.

They have advanced gestures like if you do a long swipe up from the bottom, the tablet will bring you back to the home screen. For example, if you swipe and hold, you can see all your open windows, when you drag to the side, it brings split-screen mode. Generally, to get back to the normal screen, the user should swipe from the left, generally, these upgraded gestures simplify the most common interactions.

Chromebook duet comes with Google family link parental controls. Since the tablet could get used around the household, the user can easily regulate the restrictions and set limits to monitor habits easily.

Chrome OS is capable of enhancing and facilitating a switch from Windows or macOS. Microsoft avails several versions of typical office applications such as PowerPoint, Word, and excel, thus enabling one to continue working on preexisting projects. However, you can’t complain if you get offered Google’s own free word processor, presentation builder, and spreadsheet.

Duet Google’s assistant is significantly advanced since you can inquire about your laptop to direct you on information about the open document or your schedule.

Lenovo comes with a 7180mAh battery, which gets cased in the Ideapad Chromebook duet. Its uptime is up to 13 hours. In reality, it’s more like 10 hours. Maybe, if you would turn down the brightness settings, and use it only for taking notes you could get it to work for 13-hours.

This device is loaded with a mediate Helio p60t preprocessor, 4GB of RAM, an ARM G72 MP3 graphics card, and 128GB eMMC. The AMD and Intel feature is not present in this device, which otherwise would make it even expensive.

The device contains two speakers onboard and dual-array microphones. The rear camera comes with 8MP, while the front is a 2MP camera.

Concerning the ports, the Chromebook duet consists of a single port, which is the USB type–C port, which functions as a display port.

Thus coinciding with the compatibility of the system, the user may expand the USB Type-C hub with a docking station. Which gives you a bit more options to add more devices to your tablet, if needed. You will be able to add keyboards, mouse, memory cards, monitors, printers, etc.

It’s under $300. Let’s remember that. Comparing to devices such as iPad Pro or Microsoft  Surface Go 2, sure, it’s not as great, of course. But this is a budget tablet and here at worldoftablet we are generally impressed by the new Lenovo Chromebook Duet.

The Duet also has a very vivid and colorful touchscreen display and it outperforms all of its Chromebook rivals on performance, battery life, and brightness.

If you’re always on-the-go, a busy-bee, traveling, or need to entertain your kids from time to time this will be a great secondary 2-in-1 device, if that’s your purpose, we would recommend this device in a second.

We hope this article gave you an insight into the new Lenovo Chromebook. Let us know in the comments below what do you think about the new device.

Can you use Word and Excel on Lenovo Chromebook Duet?

Yes, you can download Microsoft Word and Excel directly from the PlayStore. Just like for any other device, you will have to have Office 365 subscription or make a one-time Office Home & Student purchase. They’re also a free online version of Office in your browser. You will need to register for an MS account if you don’t have one, already. Which is free. There’s also an option to use Google Docs. You just have to log in to your Google account. This is the most popular option among students since sharing and editing is easier with other classmates and teachers.

Can you install Windows on Duet?

No, you can’t install Windows on Chromebooks. They are specially designed to run Chrome Os.

Is it an Android?

Lenovo Chromebook Duet runs Chrome OS, but you can still install and run Android apps, without any issues. Chrome OS is evolving each year and getting closer to Android devices.