In our modern world, there are dozens of tablets to choose from – cheap, expensive, small, large. Are you looking for a brand new tablet for an affordable price? Lenovo Tab E10 may be a good choice if you’re looking for a budget class tablet, it’s perfect for browsing the web, watching movies, and doing some reading and some basic work like reading emails, zoom/skype calls, etc.

It was released back in 2018. This tablet is a cheap solution for families with kids. This medium-size tablet will allow you to binge on your favorite shows and movies all day. It’s one of the cheapest 10-inch tablets out there.

So to get a deeper look at this device our team has made a review for Lenovo Tab E10. Let’s take a deeper look.

Things inside the package

Lenovo Tab E10 comes with a 10.1-inch display and an aspect ratio of 16:10. This means that it’s an HD display with a resolution of 1280 x 800 pixels. Of course, full HD would be much more pleasing, but considering its price it’s comparatively good.

This screen includes an IPS panel. Which makes the viewing angles wide. The screen will give you a colorful and crisp clear visual journey to share with your family.

Although it’s not laminated and so bright, this means you will see reflection easily while using this tablet outside.

Lenovo Tab E10 is equipped with a Qualcomm Snapdragon 210 quad-core processor. This processor only supports up to 4 GB of RAM. Although this doesn’t matter because this device comes with only 1 GB and 2 GB of RAM.

If your goal was to play games on this device, you should consider a different choice you can check the best gaming tablets.

As mentioned previously this device has only 1 GB or 2 GB of RAM, with an internal memory of 16 GB and 32 GB. But you can expand up to 128 GB with a microSD card. To do simple tasks the RAM capacity is decent, but when you start opening a lot of tabs or apps you will notice a lag. The loading speed also isn’t the best.

This tablet overall is pretty slow, If you want to draw or use it to do heavy work, Lenovo Tab E10 won’t be the best choice for you.

On the left side is the microSD card slot, a power button, the volume controls, and a micro USB port. The headphone jack (3.5 mm) is located on the right side of this tablet. For some users, the button positioning can be unpleasing, because they’re not proportionate.

One con may be that it comes only in black color. 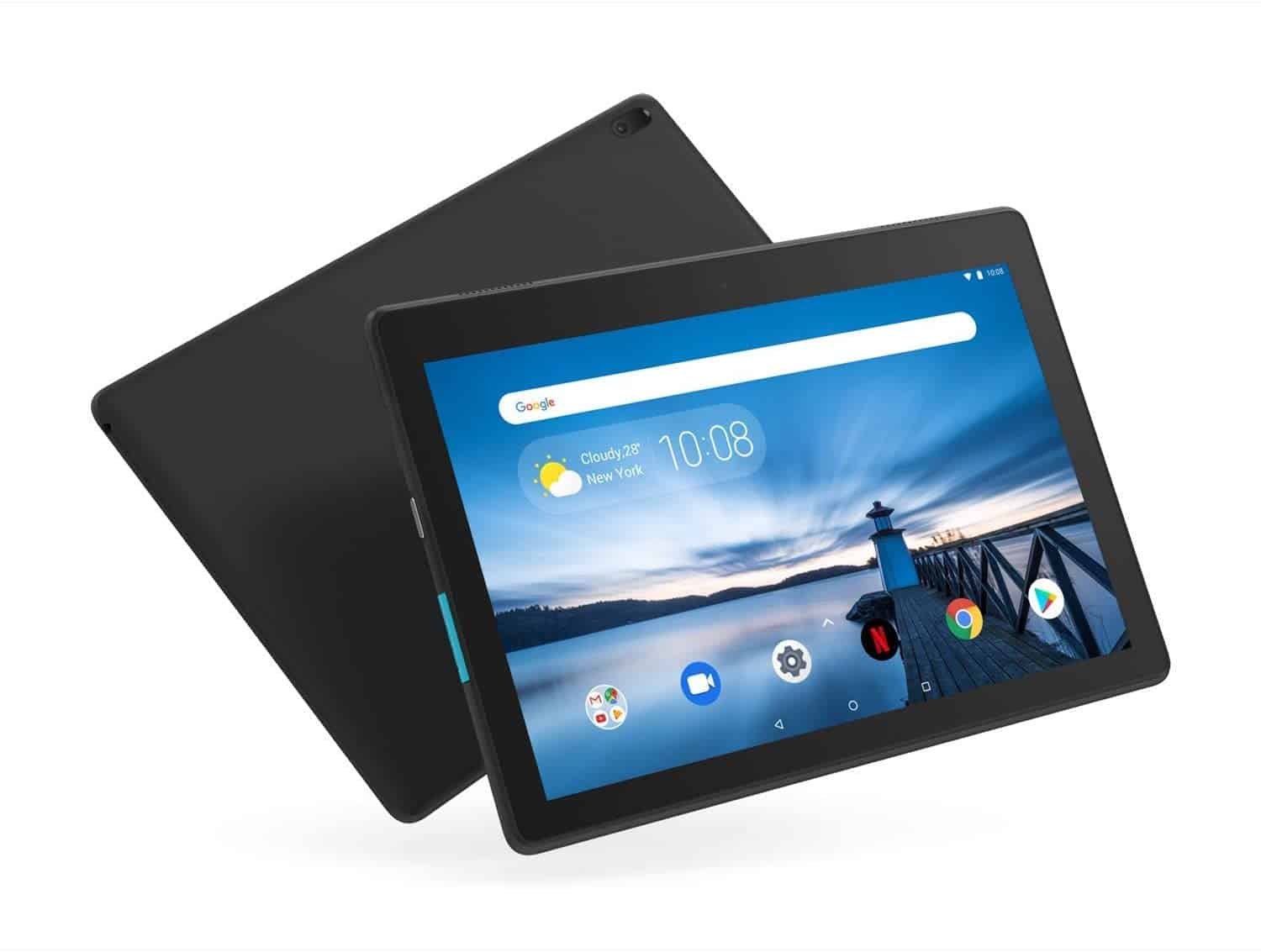 Lenovo Tab E10 is seemingly on the cheap side of tablets, so overall the camera resolutions are average. This tablet won’t astonish you with the pictures it takes. If you want to do some simple photos, it won’t be a problem. But you can’t store many photos because of the low storage capacity.

It has two cameras. The back camera is 5 megapixels and the front camera is 2 megapixels. With this device, it’s hard to take good pictures, even in a good light. Although to make video calls it works pretty well.

One of the cons may be the front camera position because it’s located in the middle while in landscape position. Most of the users hold their tablets in portrait mode. So it will be quite uncomfortable to not cover the camera with one finger.

Compared to other tablets Lenovo Tab E10 has a pretty low battery life.

This device comes with a 4850 mAh battery capacity. That is up to 7 hours of battery life. Of course, if your gaming or leaving the device on in full brightness, it will be less than 7 hours.

Judging by its low cost, you get a fairly good audio system.

Two speakers generate sound in every direction thanks to Dolby Atmos® technology. Although this isn’t the best sound quality, sometimes it may sound weak and light. They’re located on the right side of this tablet.

A seemingly big con is that when the tablet is on the max volume the speaker distorts. So you have to play it on about 70%. If you’re a big music fan, we suggest you get headphones with the tablet.

Talking about performance, this tablet is good for watching videos of surfing the web. Overall it’s slow if you want to run demanding apps you won’t be pleased. They will lag or even not start.

Though some games like Mortal Combat can be run on the lowest graphics. Although when tested for Asphalt 8 it ran smoothly, frame rates were decent, and the game lagged rarely. Even on low demand apps, it takes a while to open them. So you have to be patient while they load. Sometimes it even lags while doing basic stuff.

It has a slow response rate, sometimes you can unintentionally open apps or tabs. It also stutters a little bit while swiping up and down.

Who is this device for?

On the Lenovo website, this tablet is labeled as a family entertainment tablet. So if you are a parent and looking for a cheap tablet for your kids or just a device to surf recipes and occasional entertainment this may be the best choice.

Lenovo has created this tablet to be used easily by the whole family. Parents can set up multiple accounts – some for their use, and some for their children. Each user gets to personalize their account – settings, wallpapers, social media.

All the account settings can be manually changed to provide child-friendly features. As an example, blocking inappropriate content.

What can you do with this tablet?

This is a cheap-end tablet, so its system isn’t the best for demanding apps.

Lenovo Tab E10 is an amazing tablet for reading e-books. It has a fairly wide screen and good resolution. Also, it isn’t very heavy, it lays good on one hand. These features will make your everyday reading much nicer.

On this device, you can easily watch videos, movies, and TV shows, judging by its widescreen, good resolution, and average battery life. This tablet will be your go-to in watching your favorite things.

Talking about gaming on this device, it doesn’t support some games, because of a comparatively weak processor. Low demand games will work like a charm (Subway Surfers, Temple Run). Although some bigger games also run on this device quite smoothly, like Asphalt 8. But one con may be the slow opening of these apps.

To better understand the features of this device, we have compared Lenovo Tab E10 to Lenovo Tab M10. This tablet was released a little bit later and comes in a price that isn’t much higher than the E10.

Which has a better display?

First of all the M10 has a better resolution of 1920 x 1200 pixels. Which is better indoors. Both of these devices have an IPS display which gives you good viewing angles. Also, they don’t have a laminated screen so you can see reflections easily.

These tablets lack the max brightness. So using them outdoors won’t be so pleasing. The only big difference is the resolution and that the M10 screen is a little bit smaller.

Which has a better camera?

Although you can store more pictures and videos on the M10 because you can increase its capacity to up to 256 GB with a microSD.

Comparing both devices the cameras are fairly similar. Both of these devices are suitable for video chats, but not for taking high-quality pictures.

Which tablet is faster?

Lenovo Tab M10 is equipped with Qualcomm Snapdragon 450, which provides 2 – 3 GB of RAM.

Looking side by side both tablets have minor lags and freezes. But apps like Chrome or Word work fine. Sometimes the M10 closes apps while you leave them in the background.

In general, the M10 starts apps faster and lags a bit less with many opened tabs.

Our thoughts on both devices

In our opinion, the M10 would be a better solution for gaming, because it has a better processor. The M10 can run games like PUBG Mobile and Fortnite, which the E10 couldn’t.

You can enjoy your favorite movies, TV shows, and e-books on both tablets. Although the M10 will give you more video playback time because of the longer battery life – up to 8 hours. Also, more colorful and crisp pictures judging by the resolution difference.

Both of these devices are quite similar. We think the M10 maybe a little bit better than the E10 and it costs only a few dollars more.

So this was the review for Lenovo Tab E10. This tablet covers all the basic needs. And if you’re looking for a budget tablet this might be a good pick. Of course, you have to consider if Android is the right operating system for you. We hope this review will help you make the best decision when choosing your next tablet.

If you have any comments, drop us a line below and we will make sure to respond to your comments. Have a good one.

If you love Lenovo but this device feels like it’s not enough, we recommend reading our article about Lenovo tablets, where you can find the top tablets from Lenovo together with specifications, pros, and cons – Best Lenovo Tablets