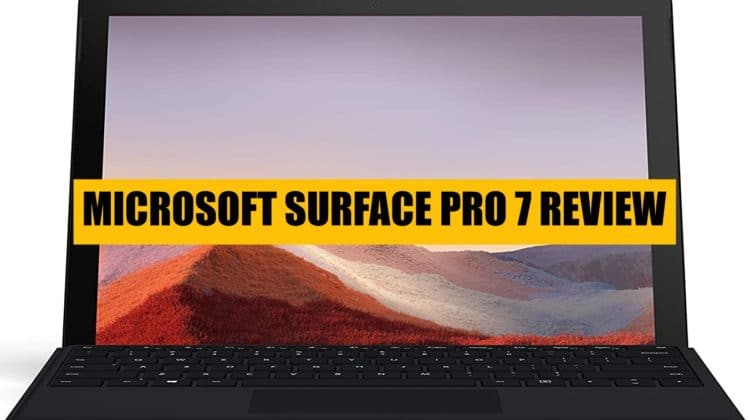 Microsoft has come out hitting hard with the new Surface range, including the Surface Pro 7. Surface Pro remains the most refined, most perfected product in the lineup. It comes with new processors and, finally, a USB-C port. USB-C allows you to charge the Surface, connect any number of accessories including displays, drives, ethernet adapters, and so on. You can also connect it to a USB-C dock for power, displays, and accessories all from one cable.

It is a great new machine, which comes in several options, Microsoft starts with i3 processor for this tablet and of course, goes up to i7 versions, so anyone can find which fits their needs best. At first glance, you can’t see any difference between the previous tablet but matters what is inside.

But still Surface Pro remains a well-made computer. With sharp-looking lines, lightly textured unibody magnesium design which has rounded corners and the unbeatable kickstand on the back with infinite hinge angles up to 165-degrees, it hits the markets and delights customers all over the world.

It has 12.3-inch ‘PixelSense’ touchscreen LCD display screen which is still crisp and beautiful, but the large bezels around the screen now look a little dated for a tablet in 2020, compared to the Surface Pro X, traditional laptops and mobile tablets. The display automatically adjusts to lighting conditions. Surface Pro’s screen is 2736 x 1824 pixels large, which gives us 267 PPI. The brightness of the screen is 400 nits, so sunny days won’t bother you too much for continuous work. The aspect ratio is 3:2 and the screen has the 10-point touch.

At 775g without the keyboard, the Surface Pro 7 is just a little of 150g heavier than the 12.9 inch Apple iPad Pro with similar dimensions. With Microsoft’s excellent 310g Signature Type Cover attached that brings the tablet to 1.085kg, which is lighter than most laptops including the MacBook Air, which is 1.25kg.

The Surface Pro 7 comes with either Intel’s 10th – generation i3, i5, or i7 processors. While the i3 will be fine for light usage, most will want the Core i5 or i7 versions, which are considerably more performance capable.

A model with i5 and i7 has Iris Plus graphics, which set aside previous surface models, but i3 (i3-1005G1) still has Intel UHD Graphics 630.

i3 and i5 versions come with 4 or 8GB of RAM, for all models storage differs from 128GB up to 1TB of SSD memory. All tablets have Microsoft Windows Home versions.

The version tested had a Core i7, 16GB of RAM, and 256GB of storage and performed as we would expect from a high-end tablet PC or laptop. It handled general computing with no slowdown at all.

Battery life was a little disappointing, with the Core i7 version it lasts around seven hours between charges, which wasn’t quite long enough to complete some workdays without reaching for the charger. The Core i5 as well as the i3 version should have longer battery life and will run through all workday. Battery life could be up to 10.5 hours on the lowest screen brightness.

It has great Wi-Fi 6 connectivity, if you have a router to support it and also tablet is equipped with Bluetooth 5, which enable you to use Dual Audio feature, listening on two devices simultaneously, and communicate with devices up to 240 meters (not for audio listening) and is more power-efficient. Of course, you got audio jack and one USB 3.0, so no extra hassle for now, if you still using old USB devices, and there’s also the usual microSD card slot hidden away under the kickstand, which is handy for expanding internal memory, and USB Type-C as mention above.

You could be heard loud and clear whether in conference calls or chatting with friends, because of enhanced dual far-field Studio Mics.

Extraordinary accessories for your Surface are still Surface Signature Type Cover and Surface Pen and Surface Arc Mouse and could be bought separately or you can use them from previous Surface models. You have to pay at least $125 for the keyboard if you want one – which is not included in the standard price. This tablet is much more useful with type cover and the new platinum cover is much darker and has a slightly bigger touchpad.

The $100 Surface Pen is the same, again making it one of the best styluses available – precise, with low-latency, tilt, and plenty of pressure levels. It magnetically attaches to the left side of the Surface Pro 7, which is a good option.

The inking experience with the Surface Pen is also extremely easy to master and smooth to use.

The Surface Dock peripheral which does use Surface Connect is now out of date, it doesn’t use USB-C. We’re expecting that to be changed in 2020 but, after all, you can use any USB-C dock available on the market.

We should mention that Surface Pro 7 still has no Thunderbolt

Surprisingly, though, there’s no 4G LTE version as yet – however, the Surface Pro X does have this capability.

Excellent kickstand, capable of stable articulation until 180 degrees, and able to stop at any point and stay in the desired position.

Surface Pen stylus is among the better Windows pens we’ve used, we’ve had heard from illustrators, animators and artists who test it on various Surface devices, that pen is always to high acclaim.

Tablet still has a MicroSD card reader which is hidden beneath kickstand.

Good battery life if you using i3 or i5 versions.

Windows Hello is fast face recognition for unlocking your device.

So-so battery life for i7 version

Lack of real design change over the predecessor

Surface Pro 7 is very difficult to fix because it is like a monolithic build. None of the components, including the battery, are user-replaceable, except for the detachable keyboard, and repairs must be performed by authorized service providers.

The Surface Pro 7 comes with various different specifications starting at $650 for a Core i3 with 4GB of RAM and 128GB of storage.

Still, the best Windows 2-in-1 around, but it remains ahead due to the lack of highly recommendable alternatives. The performance upgrade here is excellent, but the huge bezels now look outdated for today’ s market and Microsoft’s dedication to Surface Connect is not best and we think it needs a design refresh.

The Surface Pro 7 is arguably the best Windows tablet money can buy, but still, it’s not a that big difference between the Surface Pro 6.

The form, design, MicroSD card slot, kickstand, Windows Hello, and simply the way it works are still winners in 2020. The screen is still great, however, the bezels around it are functional but look a little dated compared to the Surface Pro X.

The big new thing is the addition of a USB-C port, which is very useful. It’s a little bit shame it’s not a full Thunderbolt 3 port, but we guess most won’t care. The battery life on the Core i7 version is not class-leading, so buy the Core i5 version if you want more like a full 8hour day’s work without the charger.

The biggest downside is that the essential keyboard is not included with the tablet, which pushes the price up by at least $160.