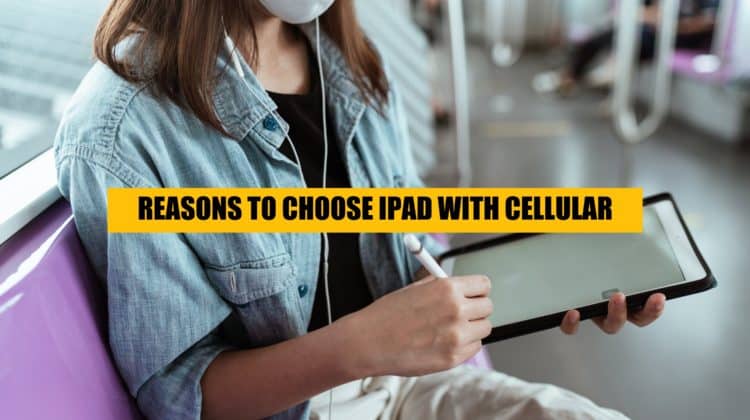 Back in 2010 when Steve Jobs unveiled the very first iPad in front of the world, it was apparent that a brand-new segment in the tech space was about to take over. Almost a decade later, while the 2021 Apple iPad is a shining evolution of its older siblings, it takes connectivity to a whole new level. The iPad continues to come in not just multiple storage variants, but you also have the ability to buy an iPad that supports only Wi-Fi connectivity, as well as an upgraded version that is compatible with Cellular + Wi-Fi.

A very old question for every aspiring iPad owner has been whether to get the base model with just Wi-Fi connectivity or spend the extra dollars for the wireless cellular connectivity. With or without the SIM card slot, you cannot make phone calls with your iPad, since it does not come with a dedicated earpiece – and rightfully so. Who wants to hold a giant tablet right next to their ear?

Reasons to Choose an iPad with Cellular Connectivity:

You could dig deep to find several reasons why a Wi-Fi-only iPad is a good deal, but it all just circles around the lower price point. However, this one-time savings can only be worth it in scenarios where you don’t plan to ever take the iPad out of the house. We’re here to make a case for why spending a few bucks more for the cellular variant of the Apple iPad is worth it.

I will admit it is much easier to find Wi-Fi hotspots in public these days, but neither are they secure nor are they reliable. The last thing you want is to scramble for the Wi-Fi password at your local coffee shop just minutes before an important Zoom Meeting. With a Wi-Fi + Cellular iPad, you have a dedicated internet connection with LTE speeds to ensure little to no connectivity drop, whether you’re waiting to catch a flight at the airport, or taking a day off at the beach.

The looming threat of cyberattacks is only growing with each passing day, with our work and personal lives revolve around the internet. With no cellular connectivity on your iPad, you’d either have to use your smartphone as a hotspot or connect to a public Wi-Fi network. Unless you have a VPN to safeguard your iPad’s Wi-Fi connection to the public network, accessing your bank account online, or any other sensitive document is risky business. A fast and secured cellular network connection on your iPad gives you the peace of mind to access all of your files and services without worrying about ransomware or data theft.

Up until now, Wi-Fi connection had the advantage of faster upload and download speeds compared to 4G LTE connectivity, but the introduction of 5G on the latest range of iPads changes that. Although the older models don’t support it, you can enjoy 5G mobile network support on the iPad Pro12.9-inch (5th Generation), the iPad Pro 11-inch (3rd Generation), and the latest iPad mini (6th Generation).

Suppose you are planning to use your iPad as a handy navigation device while on the road, the Wi-Fi + Cellular option is the preferred choice for two reasons. Firstly, being wirelessly connected to the internet allows you to use navigation apps with ease while doubling up as an entertainment center, a communication tool, and even a portable workstation when you need to send out a quick email. Secondly, the cellular model of the iPad comes with its own GPS antenna, which the Wi-Fi-only version does not offer, thus making it less desirable for mapping and navigation.

5. Ideal for the university campus

Several university campuses restrict the use of mobile devices in the classroom, or even on campus grounds entirely. Since you wouldn’t be allowed to use your phone, there wouldn’t be a way to use the smartphone as a mobile hotspot either. In times when the Wi-Fi network is not in range, or not available entirely, the only thing to save from being off the grid would be an iPad that supports cellular network connectivity.

Check out some of the best tablets for studying

Why does the Wi-Fi-only variant even exist?

You’ve probably heard of the saying – “Better to have and not need it, than need it and not have it”, and it certainly is true when it comes to any tech gadget feature. Since Apple is trying to maximize the profits, while bringing down the price tag of the iPad to compete in the saturated tablet market, the base variant of the iPad offers only Wi-Fi connectivity. And also, there are many users that only use the iPad at home for entertainment purposes – they don’t really need to get the WiFi+LTE version of the device.

For instance, the price difference between the base model of the iPad 9th Generation with only Wi-Fi and the Wi-Fi + Cellular model is more than $100. If you’re tight on the budget, one Benjamin can make a big difference, but dropping cellular connectivity could vastly alter your user experience of the iPad, depending on how you plan to use it every day.

It’s also one of those rare cases where it’s also convenient and more secure. It’s rare but it does happen.

Reasons to buy an iPad
Which iPad should I buy?
iPad Pro 2021 Review