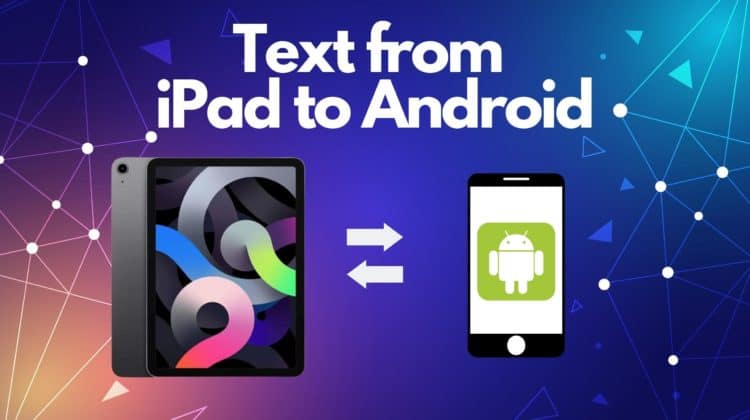 Apple has made it convenient for iPhone users to text each other via Messages, with support extended to iPads, Macs, and even the Apple Watch. But did you know it’s possible to text from iPad to Android too? While they may not be able to use the Messages app, there are still ways you can send an SMS to Android users. To learn how to text Android from iPad, keep reading!

Text From iPad to Android

The Messages app is restricted to Apple devices, so Windows and Android customers can’t use it. But you can still text Android devices by activating Text Message forwarding, but this only works if you own an iPhone. You can also send an SMS to any number via Skype or Google Voice. Additionally, you can text from iPad to Android by using an app like Free Tone.

Text From iPad to Android: Is it Possible?

Before messaging apps evolved to where they are today, sending and receiving text messages or SMSs (Short Message Service) was managed by the mobile carrier. Even today, you can send basic text messages between Androids and iPhones. However, Apple developed Messages to have far more features, many of which will not work unless you own an Apple device.

You need to own an iPhone to text from an iPad using the traditional mobile network method. The iPad piggybacks off the iPhone to send SMSs. Even if you have a cellular+WiFi iPad, it is restricted from accessing cellular voice and SMS services. iPads can only make VoIP (Voice over Internet Protocol) calls since they only support data transmission via cellular and WiFi connections.

But there are various alternatives that you can consider if you wish to send messages to an Android phone from your iPad. You can use Skype (which requires a bit of Skype credit), or you could get an app like Free Tone, which lets you text numbers in the US and Canada.

What is an SMS?

SMS or Short Messaging Service is a messaging format that was created to send text messages using GSM (Global System for Mobile Communications) network standards and today also works on 5G and LTE connections. When mobile phones first became popular in the early 2000s, “SMSing” was the most common way of sending messages between mobile phones.

It is still extremely popular today, even though a large chunk of the messaging market share has gone to various apps like WhatsApp, Signal, and others. One significant difference between SMS text messages and chat apps is that you can send an SMS via your mobile network, even when you don’t have internet connectivity.

What is an iMessage?

iMessage is a message that you can send between Apple devices. Unlike the standard SMS format, the Messages app takes advantage of the data connection to make your messaging feature-rich, allowing you to send photos, videos, and files via an iMessage.

Any message you send between Apple products — Mac, iPad, iPhone, Apple Watch, or iPod touch — is sent via the Messages app. The iMessage is also encrypted by Apple and cannot be read by non-Apple phones or tablets. It uses mobile or WiFi data to send the attachments, and if your iPhone does not have internet connectivity, it sends a standard text message using the cellular network.

You can learn more about Messages on Apple’s page.

How to Text Android From iPad

Now that we have all the jargon out of the way, and we know that Apple has made it a bit difficult to directly send a text message to an Android device from your iPad — here are all the workarounds that we could find for you!

Use an email to SMS gateway

Most network carriers in the US offer an SMS gateway, which allows you to send an email, convert that to an SMS, and have that text message sent to a phone number. The gateway handles all the technicalities between converting an email to a text message. Major carriers also allow you to send an MMS in a similar way.

The format is typically phone number @ recipientnetworkcarrier.com. For example, if you want to send an SMS to 987-654-3210 and that person uses T-Mobile as their network provider, you need to email [email protected] This email will then be converted to SMSs of 160 characters each.

Similarly, you can send text messages to other major carriers like Sprint, Verizon, AT&T, etc. Here’s a table of the email addresses for different mobile carriers:

Link iPhone and iPad via Continuity

As we mentioned earlier, you can send text messages from your iPad if you activate text forwarding on your iPhone.

To turn on text forwarding, grab your iPhone and navigate to Settings > Messages > Text Message Forwarding. You will see the list of devices linked to your iCloud account here. You should see your iPad here with a toggle button next to it — tap it to turn on text forwarding. If you don’t see your iPad here, ensure that both your iPhone and iPad are linked via the same Apple ID or iCloud account.

Here’s a great article you can check out if you want to learn more about using your iPad as a phone!

Use a third-party messaging app

So how can you send a message from your iPad to an Android device without an iPhone? Here are some third-party apps that help you do just that!

Skype offers a paid service that allows you to send an SMS to any number of your choice. You need to buy Skype credit, which also lets you make international calls with different pricing for different countries. Once you load your credits, you can send text messages from your iPad to any number in the world.

Like Skype, Google Voice lets you make calls and send text messages from your iPad. It gives you a phone number that you can use for calls, SMS, and voicemails. The plans are inexpensive, and you also get features like searchable voicemail transcripts, spam protection, call screening, and customized voicemail greetings.

Here’s a video explaining the process:

WhatsApp is used by billions (not a typo!) of users across the world and is well-loved by both iPhone and Android users. While there is no WhatsApp client that you can download on your iPad, you can still visit web.whatsapp.com and log in from WhatsApp’s settings on your phone. You can then chat using the web version of WhatsApp on your iPad. While this is not really an SMS, you can message Android users as long as they are using WhatsApp as well.

We wrote an article about using WhatsApp on your iPad, so check it out!

Like WhatsApp, Telegram is another popular chat app that works cross-platform, which means that you can chat with any Android user who has Telegram installed as well. The good news is that you won’t have to use a web version of Telegram because it has an iPad app. Like Telegram, you can also consider apps like Signal, Viber, and Snapchat to connect with Android users.

Free Tone is an app that lets you text and call people in the US and Canada. Like Google Voice, you get a phone number and voicemail when you sign up on the app. Free Tone costs $1.99 on the App Store, and you can buy add-on packs if you want more calling minutes.

Can I send a text from my iPad to a non Apple phone?

Why can’t I send a text from my iPad to an Android phone?

iPad is limited to using data transmission only via your internet connection, even if you own a cellular+WiFi model, which means that even the calls you make are with the help of WiFi calling. Since messaging an Android phone will need access to the cellular network, it is impossible to directly message an Android phone from your iPad. You can still message Android devices using third-party apps like Skype, Google Messages, WhatsApp, Signal, etc.

Why can’t I text Non iPhone users from my iPad?

Apple has restricted the iPad to only data transmission while using WiFi and cellular networks, which means you cannot make calls or send text messages via your mobile carrier. You can only use internet-based services to send messages (via iCloud) and make calls (via WiFi calling). If you wish to text non-iPhone users from your iPad, you will need to turn on Text Forwarding on your iPhone if you have one.

We hope the hacks above showed you how to text Android from iPad. While you cannot shoot an SMS to an Android phone as easily as you can with an iPhone, it still is possible to send a text from iPad to Android. If you have more questions about all the apps we wrote about or have discovered a unique way to send SMSs, we’d love to hear from you in the comments!

The three things I love most are motorcycles, running, and everything related to tech. I admit I was skeptical about tablets as a concept when they first came out. All it took to change my mind was a week with an iPad! And now I write and ramble about all kinds of tablets and how to get the most out of them.